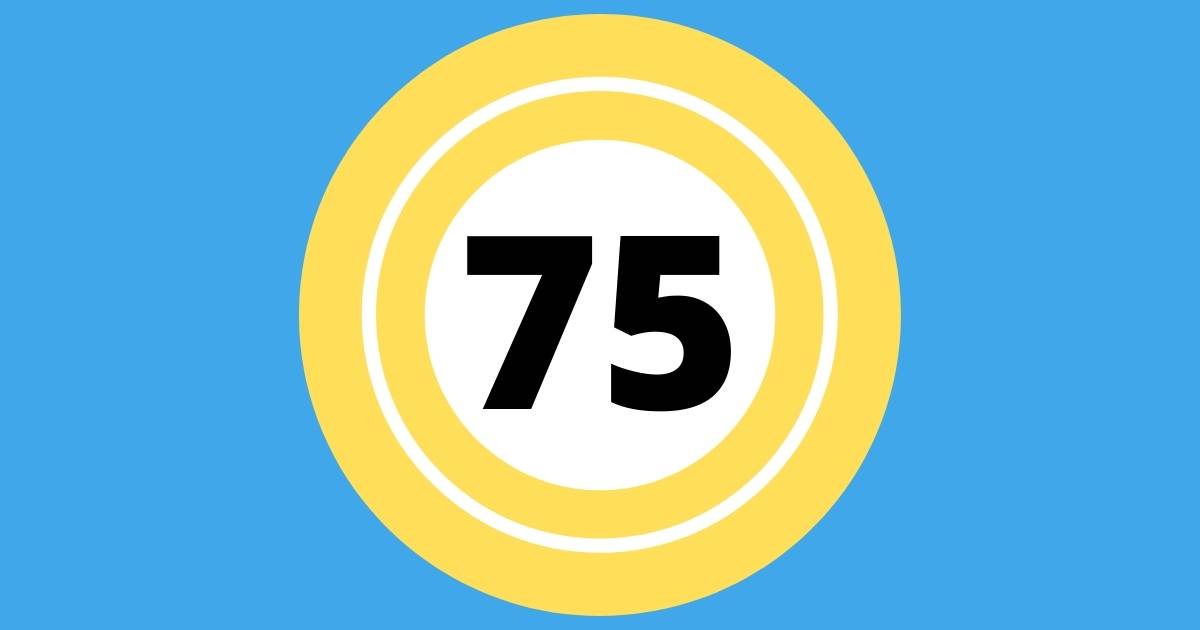 How to play 75-ball bingo

75-ball bingo, often known as pattern bingo, is a popular variant of bingo that developed in America in the 1920s. It was invented at carnivals around the country by a guy named Edwin Lowe, and it is still popular today all across the world.

With the debut of internet bingo in the early 2000s, 75-ball bingo became popular in the UK, and we Brits now adore this new kind of version. It was a departure from the traditional 90-ball bingo that most players were accustomed to, and the online bingo community still enjoys it today.

It’s a fast-paced style bingo game with a unique pattern style that you must be able to fill to win. Each ticket features a 5×5 grid that’s made up of numbers ranging from 1 to 75, with a blank spot in the centre providing you a free square. You are given a pattern to fill out before each game, and if you complete the pattern, you win the game. Simple.

How to play 75 ball bingo

A conventional 75-ball bingo game uses the numbers 1 through 75. A bingo caller calls each number one at a time until the winning card/s are determined in a live hall. The same is true for an online bingo game, albeit the balls are chosen by computer software. Each number will only be called out once throughout a game.

When a number is called, identify it on your card and mark it with your dabber. In an online game, the computer will auto-dab your numbers for you. Or you can do it manually. Some players like to dab their tickets when playing online since it provides a more involved atmosphere. However, the decision is entirely up to you.

There will be an electronic board or screen in a live hall that indicates what numbers have been called, which will help you keep track of the balls in play. Many websites will include a section on the screen that displays the last 4-6 numbers called.

You can play Bingo 75 with as few as one 5×5 card. Although players usually have a dozen or more cards in play every round, it depends on what the maximum number of tickets is.

A 75-ball bingo ticket is composed of a 55-number grid with five across and five down. The word BINGO appears at the top of that card, as well as each column of the numbers is labelled with a letter.

Each card in the N row has a blank open area in the centre that all players may utilize to construct their designs.

To win at 75-ball bingo, participants must complete a pre-determined pattern by marking all of the numbers on the card.

To win the game in its most basic form (known as Single Line Bingo), players must complete a single line either down, diagonally, or across.

Over the years, bingo organizers have introduced more patterns and game kinds to 75-ball bingo, with over 300 different patterns presently available. The winning pattern for the current game will be determined by the bingo provider you’re playing on. Here are some of the more widely used patterns:

Can you win twice?

Unfortunately, not at all. Each card in a game will typically have one pattern. And after that pattern is completed, the card will become outdated.

Some games have varied rules and versions from time to time, but you will almost always have just one opportunity to win in each 75-ball bingo game.

The amount you could win is usually decided by the price of each ticket as well as the number of participants who are taking part. The higher the price of a ticket and the greater the number of players in the game, the greater the prize money. Many bingo halls and online providers will have guarantees linked to certain of their games. This assures that the winners get a set minimum amount of prize money regardless of how many players are in the Bingo 75 game.

The game of bingo itself goes back to the 1500s, which may sound strange, but 75-ball bingo first arrived in America in the 1920s.

Edwin Lowe of Atlanta, Georgia, discovered a variant of the game being played in carnivals and fairs around the country. He was enthralled by the notion and chose to further develop the game before bringing it to New York one summer.

It was initially named ‘Beano’ in the early days. But it’s said that someone mistakenly screamed ‘Bingo’ instead, and it stayed from then on. And the rest is history.

If you like something a little unusual in your game, 75-ball bingo is for you. It’s a pleasant departure from the traditional 90-ball British version. And the pattern aspect ensures that no two games are the same.

You can also readily get it online these days. And the fact that you can buy up to 96 cards every game means your chances of winning are larger than in most other bingo games.

To be honest, it’s difficult not to enjoy 75-ball bingo in general. It’s fast-paced and enjoyable. With loads of diversity, it’s thrilling to watch the patterns form as you play. The UK has welcomed this American-style game with open arms, and I believe its popularity will only expand in the future.

How to play 80-ball bingo

How to play 50-ball bingo